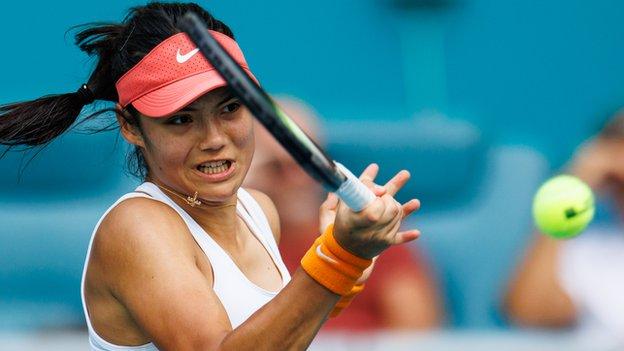 Emma Raducanu is ready to “embrace her position” as leader of a new-look Great Britain team when they face the Czech Republic in the Billie Jean King Cup, says captain Anne Keothavong.

US Open champion Raducanu, 19, assumes the role in a young squad which, for the first time since 2010, is without either Johanna Konta or Heather Watson.

“It feels like a new era. I’m excited about the team,” said Keothavong.

World number 12 Raducanu is the highest-ranked player in the British team – and the highest-profile – after her swift rise to becoming a Grand Slam champion in New York last September.

The best-of-five tie, which will be played on outdoor clay in Prague, sees two singles matches on Friday, followed by two more on Saturday and one doubles rubber if needed.

But, in another reminder of her rapid progress inside the past year, Raducanu is set to play her first senior match on clay, as well as making her debut in the Billie Jean King Cup.

Raducanu, who won the US Open on Flushing Meadows’ hard courts and also reached the last 16 on the Wimbledon grass last year, said clay could prove to be her “best surface”.

“I feel like I could love the longer points – building it, having the time on the ball to really be aggressive,” she said.

Raducanu will assume the mantle as the team’s new leader in the absence of former world number four Konta, who retired at the end of last season, and 29-year-old Watson.

Watson, who has dropped outside of the world’s top 100, decided to skip the tie in order to focus on improving her singles ranking.

“I guess a lot has happened over the past year and obviously Emma’s success has been highlighted and we’ve seen what she’s been able to achieve in such a short space of time,” said Keothavong.

“So we’re kind of getting into the unknown a little bit, and there has been a bit of a changing of the guard.

“I’m sure Emma will embrace her position, lead the team by example and really grow in that role in the years to come.”

The Czech Republic, who have won the competition six times since 2011, are without their three highest-ranked players – Barbora Krejcikova, Karolina Pliskova and Petra Kvitova.

Katerina Siniakova, another top-50 player who is the world number one in doubles, also misses out through injury.

The winners will qualify for November’s finals, while the runners-up will face a play-off tie in the same week.

However, Britain are among the nations bidding to host the finals and could also still qualify as the host nation.

While Dart and Swan are familiar faces to British tennis fans, 20-year-old Kartel will be unknown to many. She received the call-up from Keothavong after winning four of her past six ITF events.

“In Harriet and Katie we’ve got two players who have been part of the team in the past so they know what the expectations are,” said Keothavong.

“They will bring good energy to the team and in Sonay, we’ve got someone who, compared to the other players, doesn’t have that experience.

“But I’ve been really excited with what I’ve seen with her and the results she’s had this year.

“If she keeps working hard that ranking is only going to go one way.”

How to watch on the BBC