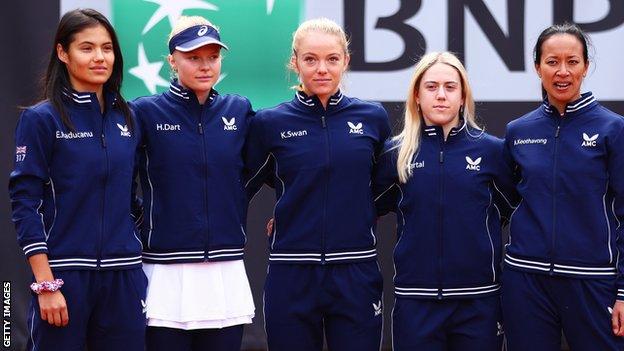 Raducanu, 19, was playing her first senior match on clay, adjusting well to the surface to win 7-5 7-5 against world number 50 Tereza Martincova.

The US Open champion levelled the best-of-five tie after Harriet Dart lost 6-1 6-0 to Marketa Vondrousova.

The nations play two singles matches on Saturday, plus a doubles if needed.

The winners will qualify for November’s finals, while the runners-up face a play-off tie the same week.

Britain are among the countries bidding to host the finals and could also still qualify as the host nation.

“This one means so much to me,” said world number 12 Raducanu.

“Playing on clay definitely took some adjusting, even now. The conditions were very windy and some bad bounces, so to adjust and adapt in the situation was very challenging but I’m very proud of how I dug in.

“In the beginning of the second set, I went a bit flat and everyone in my team was telling me the intensity had dropped. It is difficult to regain that but I’m very happy I did in the end.”

‘She didn’t let me play well’

Raducanu leads a new-look British side in Prague, with the side not able to call on either recently retired Johanna Konta or Heather Watson for the first time since 2010.

Captain Anne Keothavong recognises it is a “changing of the guard” and says she is excited by the crop of young players she has at her disposal.

But they face a difficult task against the Czechs, who have won the team event six times since 2011, on the outdoor clay, even though they are without star trio Barbora Krejcikova, Karolina Pliskova and Petra Kvitova.

Dart, 25, broke into the world top 100 recently after reaching the fourth round at Indian Wells, but she was unable to deliver a strong start for Britain.

Vondrousova is ranked 32nd in the world and her quality on clay showed.

British number two Dart broke serve in the opening game but was unable to maintain the pressure – particularly struggling on her own serve and producing seven double faults – as she lost in just 55 minutes.

“It was a very challenging match. I just feel like I need some more time on the clay. I’m very inexperienced on the surface and she is a Grand Slam finalist on this surface,” said Dart.

“She definitely put me under pressure a lot. I didn’t feel my best but she also didn’t let me play well.”