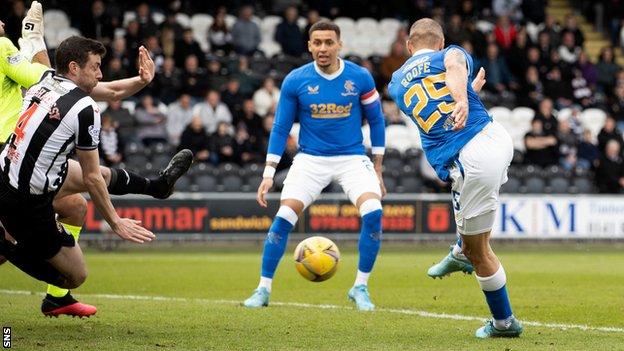 Kemar Roofe’s hat-trick powered Rangers beyond struggling St Mirren and back within six points of Celtic at the Scottish Premiership summit.

Roofe cutely netted two headers at the start and end of the first half in a morale-boosting day for the striker.

He blasted home to complete his treble five minutes after the interval.

The hosts are not clear of relegation strife, sitting six points above 11th-placed St Johnstone.

After the grim Old Firm derby defeat and the Europa League quarter-final first leg loss to Braga, Rangers needed to end a brutal week with renewed positivity. So, too, did Roofe. His largely fruitless starting role against Celtic, and 28 minutes off the bench in Portugal, will have stung.

The striker provided the perfect tonic two minutes in. Connor Goldson’s terrific diagonal parabola allowed James Tavernier to scurry in behind down the right and cross on the volley. It came to Kent on the opposite flank, and his curled delivery was neatly nodded home by Roofe.

As the half expired, Roofe pounced again, slapping the wind out of St Mirren’s billowing sails as Robinson’s troops scrapped diligently in a tepid 45 minutes. Another Tavernier delivery; another fabulously taken header.

Roofe was at the heart of the half’s only other chances of note, twice delicately laying into the path of Aaron Ramsey.

Rangers’ marquee signing could have done better with the first, steering tamely at Dean Lyness from the edge of the box, and absolutely should have converted the second, thundering off the crossbar from six yards out. Moments later, Roofe’s header spared his blushes.

The Jamaica international does not possess the same brawny presence as the stricken Alfredo Morelos, sidelined for the season, nor can he haul Rangers up the pitch as manfully, but his instincts are pin-sharp. His capacity to seek out space where there seems to be none, to free himself of defenders inside teeming penalty boxes, came to the fore again and again.

The hat-trick was sealed soon after the break. Aribo and Fashion Sakala combined cleverly down the left edge of the box before cutting back for Roofe, who lashed in at the second attempt.

The rest of the day was a procession for Rangers. Scott Wright then Amad Diallo should have made it 4-0. Aribo did with a jaw-dropping 20-yard swerver into the top-left corner.

The only elements of concern for Giovanni van Bronckhorst were first-half injuries to John Lundstram, a massive player for the manager of late, and Filip Helander, who has not long returned from knee trouble. Both were helped from the field and must be doubts for the return leg with Braga on Thursday.

In the main, though, this day belonged to Roofe. With Braga and an Old Firm Scottish Cup semi-final to come, the striker and his team needed this lift in a season-defining week.

Man of the match – Kemar Roofe

What did we learn?

If, by benching Roofe on Thursday night, Van Bronckhorst was throwing down a gauntlet, the striker responded spectacularly.

While his strengths are different to those of Morelos, he proved his penalty-box ruthlessness when properly supplied, and must surely start at Ibrox in the monumental return leg.

In between Roofe’s first and second, St Mirren threatened down the left, former Rangers winger Jordan Jones running at Tavernier, linking well with Connor Ronan and Eamonn Brophy, but created no clear-cut openings.

Defensively, they were unpicked far too easily and while they scrapped well in the midfield trenches, the bruising run of form cannot continue if they are to avoid a harrowing end to the campaign.