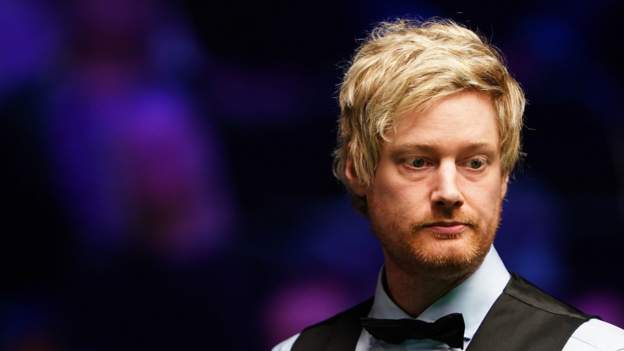 Reigning champion Neil Robertson fell to a shock 6-2 defeat by amateur John Astley in the first round of the UK Championship in York.

Apart from a break of 124 in the sixth frame, the Australian showed little of the form that helped him win the English Open earlier in November.

As did Mark Allen who reeled off five frames on the trot to claim a 6-2 win over Michael Judge.

World number two Trump progressed into the second round with a routine 6-1 win over world seniors champion David Lilley.

However, a missed black in the next frame saw his opportunity of applying any pressure gone, with Trump having the better of two scrappy frames before closing out the match with a stylish 132 clearance which included several exhibition shots.

Current Masters champion Yan made breaks of 67, 100, 107 and 92 on the way to a 6-0 whitewash of Hong Kong’s Ng On-yee, with the former women’s world champion scoring just nine points in those frames.

While that result was not unexpected, Robertson’s defeat by a player that has fallen off the main tour and last reached the second round of the UK Championship in 2013, can be regarded as a huge upset.

The 2010 world champion arrived in York with a victory over John Higgins and a 21st ranking title fresh in his mind and confidently talked up his chances of repeating his 2020 success, when he triumphed 10-9 in an epic late-night finish against Judd Trump.

However, Astley becomes the second amateur to beat a UK champion this week after Shaun Murphy was knocked out by China’s Si Jiahui on the opening day – prompting Murphy to heavily criticise the presence of amateur players in professional events.

“It hurts,” Robertson told BBC Sport. “As the defending champion you don’t want to give up the title so easily, but you have to credit John.

“He played a brilliant match. He probably played the match of his life. There was a crowd, it was on the main table and he stood up to it and played as if he had nothing to lose.”

Astley settled quicker than Robertson, making a frame-winning 74 break to open up as Robertson struggled to find any rhythm.

And the Gateshead player, who performed at Sheffield’s Crucible Theatre – better known as the World Championship’s regular venue – in a play called The Nap in 2016, knocked in a long pink to edge back ahead after Robertson levelled.

Astley took the fourth frame of a drawn-out affair and made a nerveless 83 before Robertson rallied with a break of 124.

But there was no comeback forthcoming, with Astley superbly making a break of 119 before sealing his victory.

And having seen the impact of some of the lower-ranked players and the amateur top-ups, he said he could not support the view expressed by Murphy, Mark Selby and Mark Williams around amateurs participating on the professional tour.

“I certainly don’t agree with it,” he told BBC Sport.

“It is not like they are bad amateurs and are getting a free ride on the Tour. They are under no less pressure than any other player.

“If you have amateurs like John Astley, some of the Chinese players and Michael White, these are amazing players. I think snooker is in a great place at the moment.”

Meanwhile, Northern Ireland’s Allen overcame a slow start to get the better of the Republic of Ireland’s Judge.

Allen did not defend the Champion of Champions title last week for what he described as “personal reasons” and initially looked a little rusty as a consequence of that, and his early exit from the English Open.

Despite winning the first frame, he fell 2-1 behind, but capitalised on some loose positional play from Judge to turn the match around, making a composed 69 in the seventh frame before rounding off his win.