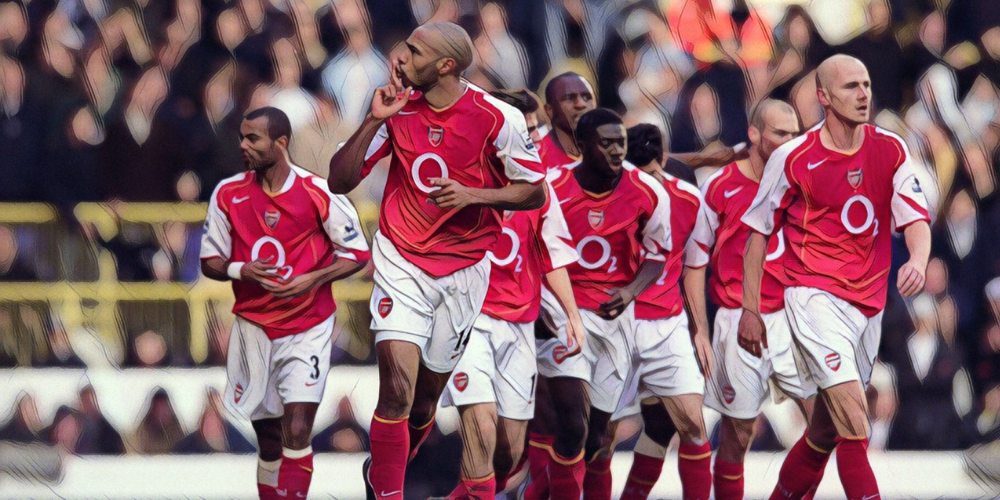 The north London derby has so often provided entertaining and high-scoring encounters in the Premier League era, yet none have been quite as dramatic or thrilling as Arsenal’s 5-4 win over Tottenham at White Hart Lane in November 2004.

The Gunners had clinched the title on their rival’s home turf just a few months earlier, eventually ending the season undefeated while Spurs were left languishing in 14th – 45 points behind.

Arsene Wenger’s men – who had seen their 49-game unbeaten run ended just weeks earlier – were unsurprisingly the heavy favourites heading into the clash, yet were given a real game of it by Martin Jol’s side, in what was the Dutchman’s first league game in charge.

The hosts had taken a surprise lead on 37 minutes, but found themselves 3-1 down after an hour. Jermain Defoe pulled a goal back for Spurs to spark a topsy-turvy end to the clash, with the two teams exchanging four goals in a frantic finish that saw Arsenal edge a thriller.

Here’s a look at the Arsenal starting XI from that unforgettable clash in 2004.

Not the best day for either defence, although there was little that Jens Lehmann could have done to keep Spurs at bay, the German largely blameless for all four of the home side’s goals.

The former Borussia Dortmund stopper had only arrived in 2003 and would end his debut campaign as an ‘Invincible’, proving a more than adequate replacement for the long-serving David Seaman.

He spent five years in north London until his departure for Stuttgart in 2008, spending two years in Germany before stepping out of retirement to return to Arsenal in March 2011 due to a goalkeeping injury crisis, making a solitary outing against Blackpool in what was his 200th appearance for the club.

What an afternoon it was for Lauren, the right-back teeing up Thierry Henry for the Gunners equaliser in first-half stoppage time, before putting his side ahead just after the break following a well-taken penalty.

A perhaps underrated member of this side, the former Cameroon international spent seven years in Arsenal colours, notably featuring heavily in the remarkable 2003/04 campaign, before departing for Portsmouth in 2007.

Another key part of the ‘Invincibles’ side, Kolo Toure spent seven years as a regular fixture in the Gunners’ backline, before making the move Manchester City in 2009, where he later linked up with brother Yaya at the Etihad.

While at times erratic, the Ivorian was no doubt a committed and formidable defender during his time under Arsene Wenger, although perhaps struggled following his departure from the club, enduring bit-part roles at both City and Liverpool.

The centre-back followed Brendan Rodgers to Celtic in 2016 and is now working under the Northern Irishman as a coach at Leicester City.

Not a name remembered too fondly by Arsenal supporters, Pascal Cygan was one of a number of questionable centre-back signings from Wenger around that time, as the club struggled to find a suitable replacement for the legendary Tony Adams.

While not necessarily directly at fault for any of the four goals on the day, his selection perhaps offers an explanation as to why the Gunners’ backline was so leaky, with the Frenchman offering some dismal displays throughout his four-year stint at the club.

📆 On this day in 2004, Arsenal beat Tottenham 5-4 at White Hart Lane in an extraordinary north London derby. pic.twitter.com/r9hbtdydtv

After departing in 2006, he ended his career with brief stints at Villarreal and Cartagena, retiring in 2011.

Arguably the greatest left-back England has ever produced and the finest in his position in the Premier League era, Ashley Cole had everything that a full-back should have, quality and speed in attack, but also a willingness to defend first and foremost.

While perhaps more synonymous with his later spell at Chelsea, it was at Arsenal that he really announced himself as a top talent, making 228 appearances for the club after his debut during the 1999/2000 season.

His last outing for the club came in the 2006 Champions League final defeat to Barcelona, before his highly controversial deadline day switch to Stamford Bridge that summer. He spent eight trophy-laden years with the Blues before making moves to Roma, LA Galaxy and Derby County, retiring in 2019.

Freddie Ljungberg was heavily involved in proceedings in the 5-4 win, drawing a foul from Noe Pamorot inside the penalty area to help make it 2-1, before his neat second-half finish restored Arsenal’s two-goal advantage after Jermain Defoe had momentarily made it 3-2.

The Swede had joined from Halmstad in 1998 and quickly cemented his status as a fans’ favourite, winning two league titles and three FA Cups over the next nine years, before sealing a switch to West Ham United in 2007.

After just a solitary season with the Hammers, the midfielder spent time with a smattering of clubs across the globe, notably Celtic, before announcing his retirement in 2012.

He later returned to north London as part of the coaching set-up and had a brief stint as interim boss prior to the arrival of Mikel Arteta.

The Frenchman netted Arsenal’s third goal to put them in the driving seat, capitalising on some gaping holes in the home defence to surge clear and score, with the goal coming in what proved to his final season at the club before his departure for Juventus in 2005.

The midfielder had been pivotal to the club’s rise under Wenger in the nine years previously, transforming from a relative unknown into one of the most dominant and commanding midfielders in the division, while also emerging as one of the most iconic captains in the club’s history.

Vieira is now back in the Premier League as manager of Crystal Palace.

The arrival of Cesc Fabregas marked the dawn of a new era at Arsenal, as Wenger sought to pursue a more technical brand of football, despite the previous success of a more dominant and hard-nosed midfield pairing of Vieira and compatriot Emmanuel Petit.

While the beautiful football didn’t always equate to success, the young Spaniard thrived as the new fulcrum of the midfield, with his clever reverse pass in the build-up to Ljungberg’s goal an early indication of his exceptional quality on the ball.

He broke Arsenal hearts after returning to Barcelona in 2011, before making a successful switch to London rivals Chelsea in 2014. The 34-year-old currently plays for AS Monaco.

Edging out Robert Pires on the day for a starting berth was Jose Antonio Reyes, the Spaniard having joined halfway through the previous season.

While he showed early promise, netting nine league goals in the 2004/05 season, he struggled to adapt to the physicality of the Premier League and returned to his native Spain with a loan stint at Real Madrid in 2006, before joining rivals Atletico on a permanent deal a year later.

He spent the remainder of his career largely in the Spanish top-flight, as well as a brief stint in China, although he was sadly killed in a car accident in 2019 at the age of just 35.

A rare quiet afternoon for Dennis Bergkamp, although he was largely integral to everything good about Arsenal during his eleven-year stint in north London, the silky Dutchman both a fine scorer of goals but also an exquisite creator, registering 94 assists and 87 goals in his Premier League career.


After joining the club in 1995 after an underwhelming stint at Inter Milan, the former Ajax man would go on to win three league titles and four FA Cups, before eventually retiring in 2006.

The scorer of Arsenal’s opener with a typically composed finish, Thierry Henry remains one of the finest players to have ever graced the Premier League, scoring goals for fun and making a mockery of defenders in a blistering eight-year stint.

The club’s record goalscorer (228) had a moment to forget late on in the clash after gifting away possession in the build-up to Freddie Kanoute’s late strike, although that was a rare mistake in an otherwise glittering spell.

After departing in 2007 to join Barcelona, the World Cup winner ended his career at MLS side New York Red Bulls, though made a brief and emotional loan return to north London in 2012.

Robert Pires certainly made his mark off the bench, squeezing in an effort from the angle to make it 5-3 with less than ten to play, having replaced Reyes late in the second-half.

Such a finish was typical of the Frenchman’s coolness in front of goal, as he netted an impressive tally of 62 league goals across six seasons at the club, before departing for Villarreal in 2006 with two league titles and three FA Cups under his belt.

A late replacement for compatriot Bergkamp, a fresh-faced Robin van Persie enjoyed his first taste of the north London derby, having signed from Feyenoord that summer.

After slowly developing into a key player for the Gunners, he scored 96 goals in 194 league games for the club, notably netting 30 in his final season at the Emirates before souring his relationship with Arsenal supporters by joining Manchester United in 2012.