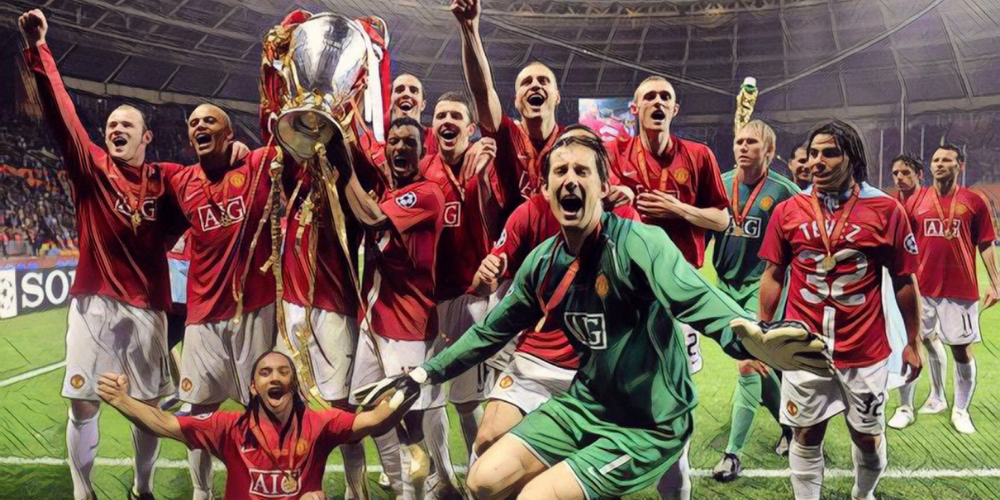 Manchester United’s dramatic victory in the Nou Camp in 1999 is rightly remembered as the defining moment of Sir Alex Ferguson’s tenure, yet his second Champions League triumph nine years later is significant in its own right, as the Red Devils overcame rivals Chelsea in the first all-English European final.

The two Premier League powerhouses met in Moscow with both arguably at the peak of their powers, with United hoping to bag a third European Cup in their history, while the Blues were seeking to cap their remarkable rise under Roman Abramovic with a first triumph in the competition.

A hard-fought encounter saw Cristiano Ronaldo open the scoring early on, before Frank Lampard struck back just before half-time, with the two left to be separated by the dreaded penalty shootout.

A rare Ronaldo miss had handed Avram Grant’s side the advantage, but Chelsea captain John Terry squandered a chance to clinch victory following his infamous spot-kick slip, with Nicolas Anelka going on to see his penalty saved to hand United the trophy – with the win a fitting victory for the Red Devils as it came 50 years on from the tragic Munich Air Disaster.

Here is the Manchester United side which came out on top back in May 2008.

Success is so difficult to achieve without a world-class goalkeeper and Man United had just that in Edwin van der Sar, the veteran Dutchman solving a problem position after arriving from Fulham in 2005.

The departure of Peter Schmeichel following the treble-winning campaign had left a significant void in Ferguson’s side, with it taking almost six years for the number one jersey to be suitably filled following a succession of failed goalkeeping imports.

A former Champions League winner with Ajax, Van der Sar brought a wealth of experience and quickly made his reported £2m transfer fee look like an absolute bargain, notably producing the winning moment in Moscow by denying Anelka from the spot.

After six years in Manchester he retired in 2011 as a four-time Premier League winner, with his last competitive game coming in the Champions League final defeat to Barcelona at Wembley.

With club captain Gary Neville ruled out for almost the entire 2007/08 campaign, Wes Brown got the nod at right-back for most of the season and started the final in Moscow, having been an unused substitute during the club’s Champions League win nine years earlier.

The versatile defender went on to make a vital impact against the Blues, providing the cross – after a good interchange with Paul Scholes – for Cristiano Ronaldo to rise highest and head home the opening goal after 26 minutes.

Brown was later withdrawn in the closing seconds of extra-time by Anderson ahead of the the penalty shootout, with the Brazilian duly converting. The defender struggled for game time over the following seasons, before joining Sunderland in 2011, retiring in 2018 after brief spells with Blackburn and in India.

Captain on the day in Neville’s absence, Rio Ferdinand is arguably one of the greatest defenders of the Premier League era, having risen through the ranks at West Ham, before moving to Old Trafford in 2002 via a brief stint at rivals Leeds.

The England international cemented himself in Sir Alex Ferguson’s side and enjoyed a trophy-laden 12-year career with the club, before departing for Queens Park Rangers in 2014.

As for his display in Moscow, both he and the man below did well to contain the ever-dangerous Didier Drogba – prior to the Ivorian’s red card in extra-time – although Ferdinand was unfortunate to see the ball deflect off his back into the path of former Hammers teammate Frank Lampard for Chelsea’s equaliser.

The other half of a magnificent centre-back pairing, Nemanja Vidic overcame a shaky start to life in England – after joining from Spartak Moscow in January 2006 – to become one of the most feared and respected defenders in Europe.

While Ferdinand had the speed and the quality on the ball, the Serbian was the defensive rock at the back, throwing himself at anything and everything, be it defending his own box or in attempting to score at the other end.

The typical old-fashioned, hard as nails centre-back, Vidic spent just over eight years with United before making the switch to Inter Milan in 2014, with United fittingly allowing both he and Ferdinand to walk away at the same time.

As for his role in the final, his most memorable moment was arguably his involvement in the fracas that saw Drogba sent off, with Vidic on the receiving end of a ‘slap’ from the Chelsea striker.

Completing the back four is Patrice Evra, with the Frenchman also overcoming a difficult first few months in English football to play a crucial role in five Premier League title triumphs, as well as the success in Moscow.

A larger than life character off the pitch, as his post-playing career has illustrated, Evra was a classy operator on the pitch and provided a persistent outlet down the left-flank.

The triumph in 2008 would have been all the sweeter as the left-back had suffered defeat at the hands of Jose Mourinho’s Porto side in the showpiece four years earlier while at Monaco.

He featured in three more Champions League finals – two for United, and one for Juventus – having been another to leave Old Trafford in 2014.

Owen Hargreaves’ career with the Red Devils is most remembered for being cruelly ravaged by injury, but the midfielder made a huge impact during a debut campaign that was capped by a pivotal performance in the showpiece against Chelsea.

A former Champions League winner at Bayern Munich, the England international was given the nod by Ferguson for the final in a surprise right-wing berth, with his hard-working and tireless style proving valuable in the high-stakes encounter.

After putting in an excellent shift across the 120 minutes, the versatile midfielder went on to score in the shootout, stepping up after Ronaldo’s earlier miss.

After a strong first season in Manchester, Hargreaves sadly made just five more appearances across the next three seasons, before departing for a brief stint at Manchester City.

Michael Carrick was another unsung hero in the United midfield, with the current first-team coach lining up alongside Paul Scholes for the final, having joined from Tottenham Hotspur two years earlier.

In the showpiece itself, the Englishman perhaps should have made it a more comfortable affair as he squandered a guilt-edged chance to make it 2-0, only for Petr Cech to superbly deny him from close range, although he netted United’s second spot-kick in the shootout.

After 12-years at the heart of the United midfield, he retired in 2018 with a catalogue of medals to his name, notably winning five Premier League titles during his stint at Old Trafford.

One of the few remaining members from the treble-winning squad, Paul Scholes had been forced to sit out that victory in the Nou Camp due to suspension, after picking up a booking in the semi-final against Juventus.

Sir Alex Ferguson guaranteed a spot in the starting XI in Moscow as recognition of his service to the club, with the midfielder having scored a trademark stunning strike from distance during the semi-final win over Barcelona.

The veteran midfielder played his part in the opening goal in Moscow, before being replaced late on by long-time colleague Ryan Giggs. He initially retired from the game in 2011, before calling it quits a second time after reversing his retirement decision and helping United claim their most recent league title in 2013.

The Portuguese icon is back at Old Trafford to open up another chapter in his illustrious career, with the hope that the 36-year-old can replicate the type of impact he made during his first spell with the club.

It was arguably in the 2007/08 campaign that he truly announced himself as a global superstar, as he fired in 42 goals in all competitions to help the club secure a second successive league title and reach the final in Moscow.

Having opened the scoring with his trademark towering header, Ronaldo then looked to be the man to cost his side the trophy, as he saw his stuttering spot-kick saved by Petr Cech to hand the advantage to their Premier League rivals.

Fortunately for him, United clinched the trophy regardless, with Ronaldo later claiming the first of his five Ballon d’Or awards before departing for Real Madrid in a world-record deal in 2009.

Carlos Tevez severed his ties with the Red Devils after joining rivals Manchester City in a controversial move in 2009, but there’s no denying he was a key part of arguably one of the greatest forward lines in the club’s history.

While often overshadowed by the exploits of the man above and the man below, the hardworking Argentine quickly became a fans favourite for his relentless work ethic, as he sacrificed parts of his game to allow the likes of Ronaldo to shine.

Having scored five goals en route to Moscow, Tevez started and played the full 120 minutes in the final, notably netting United’s first spot-kick in the shootout to send them on their way to victory.

Manchester United and England’s record goalscorer, Wayne Rooney needs no real introduction, with the forward an instant hit at Old Trafford after netting a hat-trick on his debut as a teenager back in 2004.

Like Tevez, Rooney perhaps sacrificed himself at times for Ronaldo, with the former Everton man thriving in an all-action role rather than simply as an out-and-out goalscorer.

Rooney was far from his best in what was largely a cagey final, before he was eventually withdrawn in the first-half of extra-time with Nani taking his place. He featured in two further Champions League finals for the club, scoring in the 3-1 defeat to Barcelona in 2011.

The only player to play in both 1999 and 2008, Ryan Giggs entered the fray in Moscow as an 87th-minute replacement for Paul Scholes and perhaps should’ve got himself on the scoresheet in extra-time, a tame poked effort blocked off the line by John Terry.

The Welshman scored what turned out to be the winning penalty, with Van der Sar going on to deny Anelka and secure United the trophy – which the veteran winger held aloft with teammate Rio Ferdinand.

He later played in two more Champions League finals – starting in the losses in both 2009 and 2011 – before eventually bringing an end to his lengthy playing career in 2014.

The Portuguese winger capped a bright first season in English football with a Champions League winners’ medal, after coming on for Wayne Rooney in extra-time and slotting home a pressure-penalty in the shootout, having known a miss would have led to defeat.

There were flashes of brilliance that followed for the mercurial talent, but a lack of consistency was ultimately his downfall and he was moved on by Louis van Gaal in 2014. After spells in Portugal, Turkey, Spain and Italy, the 34-year-old currently plies his trade for MLS side Orlando City.

Another arrival in the summer of 2007, the young Brazilian was thrust into the action in Moscow in the fifth minute of stoppage time in extra-time, with his sole responsibility to take a spot-kick.

While recent evidence has suggested such a move is not often wise, the former Porto man brilliantly fired home his penalty with the shootout into sudden death – his first of the game.

After spending seven more years at the club as a valued squad member, Anderson departed for Internacional in 2015, before retiring last year after a brief spell in Turkey.

Read – Remembering the XI that featured in Fergie’s 1,500th and final game as Man United manager