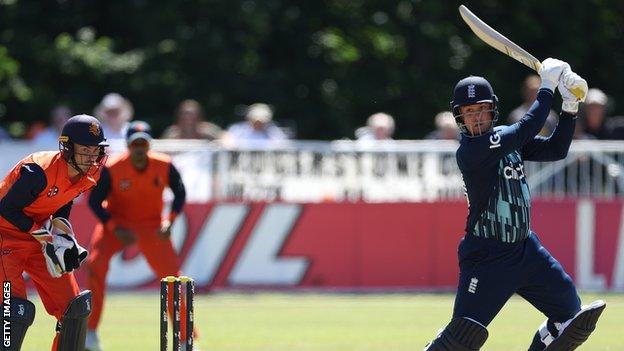 Buttler deputised for injured captain Eoin Morgan, who was suffering with a groin injury, and saw the Dutch dismissed for 244 as Scott Edwards (64) top scored.

David Willey finished the pick of the attack with 4-36 before England made light work of the total in 30.1 overs as Buttler and Roy guided them home with unbeaten knocks.

This was the ninth time Buttler has skippered England in ODIs and his record reads won six, lost three.

Morgan’s enforced absence meant he was denied the chance to atone for two consecutive ducks in the first and second matches in Amstelveen because of injury.

It will inevitably raise question marks about whether, at 35 and with his form and fitness seemingly deserting him, he will continue as England captain.

His future in the side may be in doubt but the team Morgan built in his image continued their buccaneering approach to comfortably dispose of a Dutch side ranked 14th in the world.

Buttler’s innings was not quite as breathtaking as his incredible 162 off 70 balls in the first ODI, but it was chanceless as he and Roy took England home relatively serenely.

The win gave England 10 points in the ICC Cricket World Cup Super League and saw them leapfrog Bangladesh into top spot in the competition, which determines qualification for the tournament in India in 16 months’ time.

Buttler’s grey matter was not particularly challenged by the Netherlands who, in truth, surrendered their wickets with poor shot selection as opposed to giving the stand-in skipper many tactical posers.

On a pitch with a touch more grass than the first two ODIs there was bounce and carry for England’s attack and the softly spoken Buttler calmly and efficiently directed proceedings from behind the stumps as he got his bowling changes spot on.

David Payne, another from England’s battery of left-arm seamers, was unfortunate not to capture a debut wicket early on. A vicious short one climbed into Tom Cooper and spooned up only for Liam Livingstone to be dazzled by the sun and miss a skier at mid-wicket.

Brydon Carse (2-49) was clocked at 90mph by the speed gun and, despite his occasional waywardness, was menacing as he accounted for both Bas de Leede (56) and Cooper (33) to put the brakes on as the Dutch looked to accelerate.

England occasionally lost their discipline in the field – Dawid Malan shelling a catch, Adil Rashid letting the ball through his legs and Buttler fumbling – but they turned the screw at the death.

The final 9.2 overs went for just 41 runs as Payne (1-38) and especially the impressive Willey – who bowled 29 dot balls all told – targeted the stumps to close out the innings against an inexperienced Dutch tail.

England made a blistering start to the chase as Phil Salt (49) and Roy stamped their authority on the Dutch attack with a stand of 85 for the first wicket.

However, they wobbled when Paul van Meekeren (2-59) nipped one back to knock over Salt’s leg stump, then two balls later bowled Malan for nought behind his legs after a misjudgment.

That brought Buttler into the fray and he quickly settled any nerves with a composed innings of two halves. He brought up his half-century off, by his standards at least, a pedestrian 44 balls.

The wicketkeeper then effortlessly went through the gears, thrilling the England fans in the afternoon sunshine with the kind of destructive six-hitting seen in the side’s record-breaking 498-4 in the first ODI.

In stark contrast to regular skipper Morgan, who has had looked so dreadfully out of touch here, Buttler oozed form, finesse and firepower with the bat.

All the while Roy edged closer to back-to-back ODI hundreds, although he offered a caught-and-bowled chance to Fred Klaassen on 75, the Dutchman spilling a dolly.

Roy regrouped and, with Buttler fast catching him, brought up his 10th ODI century off 86 balls with a confident drive down the ground.

A ball later Buttler, who was never troubled by the Dutch attack, whacked left-arm spinner Tim Pringle back over his head as well as the sightscreen and into the forest behind to put the gloss on the victory.

It was England’s 34th six of the series as they sealed the win with 19.5 overs to spare.

In this kind of form they will take some stopping in the rest of the summer, with or without Morgan.

England captain and player of the series Jos Buttler: “Another great victory. I thought we played really well with the ball to restrict them, picked up wickets at crucial times and it was a brilliant batting display again.

“There’s a lot of cricket coming up in a short space of time which is very exciting. We’ve got great depth in the squad with more guys standing up on this trip and pushing up the competition in the squad which is just what we want to see.

“I thought David Payne bowled brilliantly on debut, Brydon Carse looks exciting, I was impressed with Phil Salt. There is this deep pool of players that are pushing the game forward for us in English cricket.”

Netherlands captain Scott Edwards: “We took some good learnings from the series, the boys will be better for it and we’ll come back harder in our next series.

“I thought today was a harder wicket and they made it look pretty easy.”