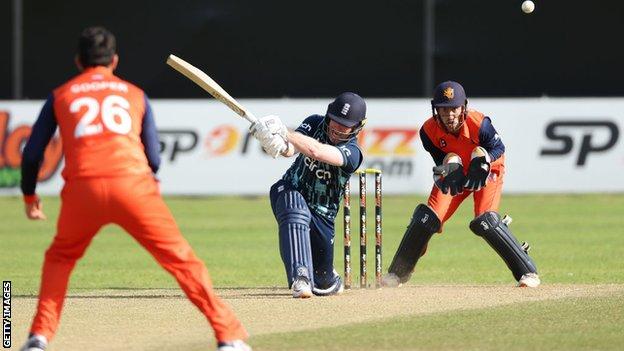 Jason Roy has backed Eoin Morgan to rediscover his one-day form after the England captain was out for a second successive duck against the Netherlands as his side wrapped up a series win.

Morgan’s last half-century in any format of cricket came in July 2021.

“He’s just a knock away from everyone being all over him again,” said Roy, who marked his 100th ODI cap with 73 off 60 balls in Amstelveen.

Roy’s knock, along with Phil Salt’s 77, helped England easily chase down the Dutch score of 236 for a six-wicket win in the second of three one-day internationals.

“We won the game so [Morgan] puts [the duck] to bed straight away. As soon as the result’s there, he’s happy,” said Roy, who added that he was backing his captain “for sure”.

Roy’s landmark occasion saw his wife and daughter make the trip over to Amsterdam, where he was presented with his centenary cap by another man who has played more than 100 ODIs for England, Moeen Ali.

“He’s the perfect guy to give it to you,” said Roy. “You’re not judged by your cricket in this group, you’re judged as a person and the energy you bring, how hard you work. If he went on [speaking] for a minute longer, there might have been a tear or two.”

Opener Roy was handed a suspended two-game international ban earlier this year for an undisclosed charge by the cricket discipline commission and said he went through a tough time at the start of 2022.

“Things mentally weren’t right with me at the PSL [Pakistan Super League]. I was in a weird place because I was playing good cricket but I wasn’t enjoying myself, I wasn’t happy and it was just a dark time,” said Roy.

Roy, whose son was born in January, withdrew from the Indian Premier League and took a “short indefinite break” from cricket, which he believes was key to helping him back to form.

“It was just a good two months to come home and live a normal life for a bit after a tough couple of years and a lot of months away,” he added.

“I think we had over 50 days of hotel quarantine the year before and then having a child in January and having to spend time away from him was just a bit too much.”

Having seen England’s Test XI win their series against New Zealand in entertaining fashion under Brendon McCullum, Roy says he would still love to play for the red-ball side.

“I haven’t shut the door on Test cricket but the opportunity to play red-ball is few and far between for Surrey,” he said. “Like I did before, pushing myself forward with white-ball runs is probably the way forward but the team and squad they’ve got now is extremely special and capable of doing great things.”