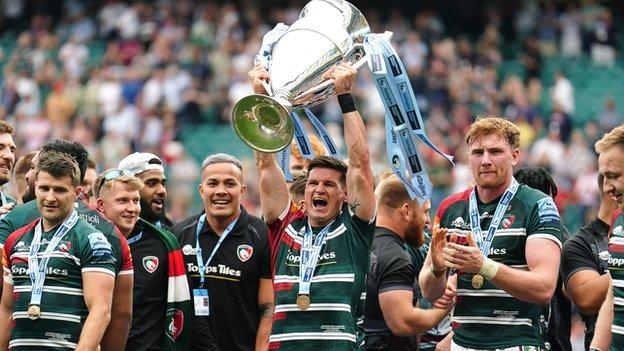 Freddie Burns says he realised a childhood dream as he kicked Leicester to an 11th Premiership title with a last-minute drop-goal against Saracens.

The ex-England fly-half, 32, who has played more than 200 Premiership games, sealed the 15-12 win in his first appearance in the showpiece event.

He came off the bench in the final to replace the injured George Ford.

“At the age of five I had two goals – to play for my country and to win a Premiership,” said Burns.

“To win a Premiership is special, but to win it at this club with this group of players means more than anything.”

Burns returned from a stint playing in Japan to re-join Tigers this season, having made 75 appearances for the East Midlands side between 2014 and 2017.

He told BBC Radio Leicester he feared he had blown a drop-goal chance earlier, and admitted it looked as if Tigers were “dead and buried” when Owen Farrell landed a late penalty to level the scores at 12-12 against 14-man Leicester, who had Matt Scott sin-binned four minutes from the end.

“We are always in the fight,” Burns continued. “We are never dead – we have showed that time and again.”

Tigers winger Chris Ashton praised Burns for “taking his chance when he came on” in difficult circumstances, as a replacement for influential fly-half Ford – who a week earlier scored 22 points in their 27-14 semi-final win against Northampton.

“That’s how good of a player he is,” Ashton told BBC Radio 5 Live.

“This week he was actually telling me about a drop-goal out in Japan that he tried to win a game and he completely missed, so who’d have thought that he’d have the chance today to win it for Leicester?”

Tigers head coach Borthwick, who has overseen Leicester’s rise back to the summit of the English game in just his second full season at Welford Road, hailed Burns as “phenomenal” after the game at Twickenham.

“He is an incredible character who has added enormously to the team on the pitch, but also off the pitch,” Borthwick said.

Saracens boss Mark McCall congratulated Tigers on a “phenomenal season” having been top of the table at the end of every regular-season round before going on to win the final.

“They were the better team and deserved to win the match,” McCall said.

“They trapped us in our half for long periods and backed that up with brilliant defensive work. We were a bit suffocated. We didn’t get anywhere near our best.

“Hopefully we can use the pain that we’re going to feel over the next few days in a constructive way to come back stronger next summer.”

Beaten Saracens hooker Jamie George acknowledged Tigers had been the better side, but said he was disappointed in the manner of the defeat.

“It’s tough. Horrible, really. We didn’t show up and that’s the most disappointing thing,” he said.

“Some of our big players didn’t show up,” added George.

The England man likened Leicester’s performance to the style that his own side employed to great effect to win so many domestic and European honours.

“They play a pretty traditional style of rugby and when they get ahead they’re really hard to beat as they keep pinning you back, a bit like the Saracens of old,” said George.

“We didn’t have an answer to it today and that is disappointing.”