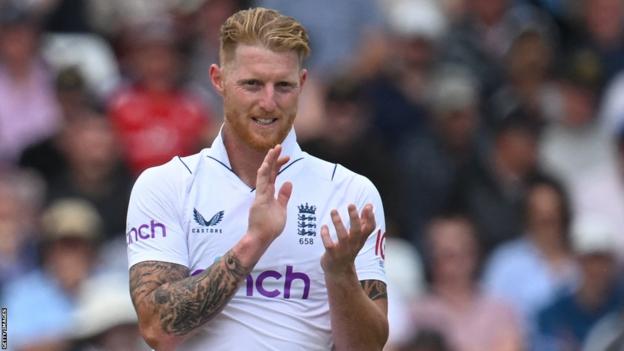 England captain Ben Stokes missed Tuesday’s training session before the third and final Test against New Zealand because he was feeling unwell.

The 31-year-old all-rounder travelled to Leeds from his home in the north east while the rest of the squad trained at Headingley.

England hold an unassailable 2-0 lead in the series, with the final Test starting on Thursday.

Stokes is yet to name an official vice-captain.

He took over from Joe Root in April and has seen England win his first two Tests as full-time skipper.

If Stokes is ruled out, Root would be an option to step in for one match, with pace bowler Stuart Broad another candidate.

Yorkshire batter Harry Brook would be in line to come into the side for his Test debut.

England were already pondering changes to their bowling attack. With the series won, the hosts could rotate with an eye on the rescheduled fifth Test against India, which starts at Edgbaston on 1 July.

James Anderson is the most likely to be rested, while Matthew Potts may also sit out.

If there are two spots in the team available, pace bowlers Craig and Jamie Overton could become the first twin brothers to play Test cricket for England.

Of the two 28-year-olds, Craig is three minutes older and has already played eight Tests, whereas Jamie is hoping for his debut.

Somerset’s Craig told BBC Sport: “Every kid’s dream is to play for England, but to do it with your brother would be pretty special, especially in a Test. Hopefully it happens and we both get the nod on Thursday.”

Jamie, who left Somerset for Surrey in 2020, said: “It’s a moment that we’ve always wanted. At times it has looked like it’s not going to happen, so the fact it potentially could happen on Thursday is really magical.”

The last brothers to play in the same Test for England were Adam and Ben Hollioake in 1997.

Sam and Tom Curran have played in the same England one-day side.

Twin sisters Jill and Jane Powell played Test cricket for England in the 1970s and 80s, but not in the same match.

Craig made his Test debut in 2017 and has played 31 more first-class matches than Jamie, who has endured a chequered history with injuries.

Jamie is the quicker bowler, capable of speeds in excess of 90mph.

“I always knew he had the ability, but it was more he had to string a good run of games together,” said Craig.

“Surrey have managed him really well because you need to look after bowlers that can bowl 90mph. He’s managed to stay fit for a long time and got his rewards now.”

The brothers were on opposite sides in a County Championship match last week, with Jamie hitting Craig on the head with a bouncer that caused a concussion, ruling him out of the rest of the match.

Craig was required to take a concussion test before he was allowed to train with England on Tuesday.

Of the duel between the brothers, their father Mark tweeted that he was “very proud”.