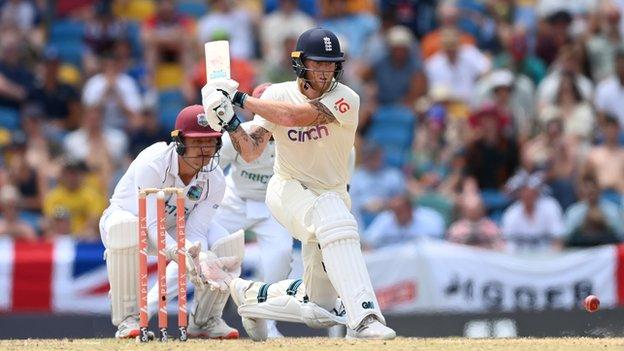 England vice-captain Ben Stokes says he cannot make any plans for the summer until he has undergone a scan to assess the extent of a knee problem.

The Durham all-rounder struggled with the issue during England’s recent series defeat against West Indies.

The County Championship starts on Thursday, while England’s first Test of the summer against New Zealand is scheduled for the start of June.

“At the moment, no training until I get these scans,” said Stokes.

Speaking on the Round the Wicket podcast, Stokes added: “Then we find out what is going on, then hopefully can make a plan from there on.”

England endured a difficult winter that included a 4-0 Ashes humbling by Australia, before a 1-0 defeat by West Indies made it four series defeats in a row and extended their winless run to nine Tests.

Stokes insisted there were some positives to take from their tour in the Caribbean, though he admitted the players may have been guilty of “playing the situation over playing the man.”

“I said in the changing room after the last game, unfortunately all that hard work we put in the first two games is going to be forgotten about because of how this last game has gone, and that’s just how sport goes,” Stokes said.

“It’s what people focus on, but I think what we need to do is to just play the man a bit more rather than the situation.

“I think that is something that this whole group can take forward – break it down and just go ‘right, it’s me against you’ rather than me against the whole situation of this whole game.”