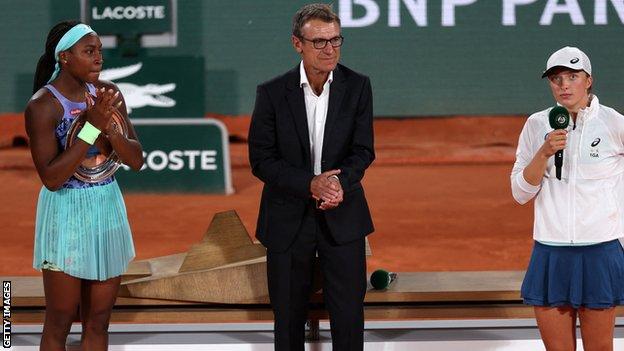 The pair are among the ‘Generation Z’ athletes – those born between 1997 and 2010 – who are using their platform to speak out about important societal issues.

World number one Swiatek has worn a ribbon in the colours of the Ukrainian flag throughout the tournament and said in a recent BBC Sport column she wanted to “remind people there is still a war going on” following the invasion by Russia.

On Saturday, clutching the Coupe Suzanne Lenglen after winning her second Grand Slam title, the 21-year-old Pole chose one of her sport’s biggest platforms to do that again.

“I also wanted to say something to Ukraine, to stay strong, because the war is still there,” Swiatek said as she closed out her speech in front of 15,000 people on Court Philippe Chatrier – and millions more across the world on television and social media.

“Since it started I was hoping, when I play the next tournament, that the situation will be better. I will still have hope.”

Swiatek’s words were welcomed by her opponent in Saturday’s final – 18-year-old Coco Gauff – who had called for an end to gun crime herself two days earlier.

The American teenager wrote the message for peace on a television camera after winning her semi-final and discussed the issue more in her post-match news conference.

“I think it’s wonderful Iga brought that up in her speech,” Gauff added after the 6-1 6-3 defeat in her first Grand Slam singles final.

“I mean, there is so much emotion going on during the awards ceremony, so for her to bring that up, I thought that was really nice and thoughtful.

“In general, I think using sports as a platform is important. I wouldn’t say anything if I didn’t think it was going to influence anybody.”

Athletes, teams and sporting bodies are able to use social media to speak to a wider global audience than perhaps most of their predecessors.

Gauff is comfortable talking about social issues and it feels like she can become a spokesperson for her generation of tennis players for years to come.

Earlier this week, she named a list of athletes – LeBron James, Serena Williams, Billie Jean King, Naomi Osaka and Colin Kaepernick – as her role models for using their platforms.

Swiatek is naturally a bit more cautious, likes to have thinking time before giving answers and says she is not comfortable with talking about “every kind of popular topic”.

On whether she thinks Gen Z athletes are more willing to speak out than previous generations, she said: “I think it’s like an individual choice.

“It’s not like everybody should do it because it also brings a little bit more pressure, because you feel like you have that impact, it can kind of mess with your performance.

“So I’m trying to really balance that. For sure, when I became the world number one I felt like I have some kind of obligation to speak.

“But I really want to keep doing that in a smart way and maybe not too much, so it’s not too overwhelming. I think it’s individual.”

Gauff, who had never reached the last four of a major tournament before, said she hoped her message after beating Italy’s Martina Trevisan reached “hundreds of thousands”.

“Between all the retweets and all that, it reaches even more people,” added Gauff, who also plays in the doubles final with Jessica Pegula on Sunday against French duo Caroline Garcia and Kristina Mladenovic.

“I think that it’s important that we mention these things. It’s not about writing a message just to end it, it’s not going to stop on the spot.

“But, for me, it’s about influencing people and influencing the leaders that are in office and leaders around the world maybe to hear that message.”