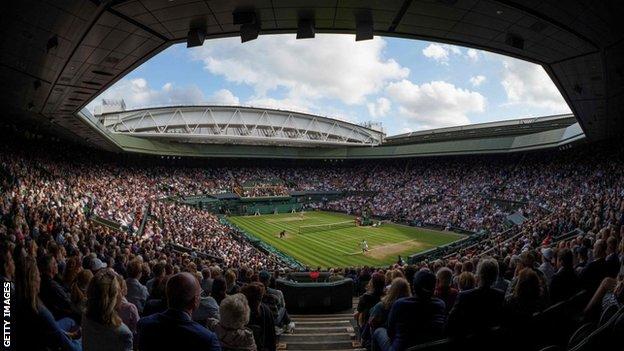 As far as unintended consequences go, Wimbledon’s decision to ban players from Russia and Belarus leading to Russian Daniil Medvedev solidifying his position as the new men’s world number one could be viewed as an uncomfortable irony.

It also speaks volumes of the complexity of a situation which promises to be one of the major talking points of the 2022 Championships, which start on Monday.

The grass-court Grand Slam’s move, taken because of Russia’s invasion of Ukraine, has received a mixed reaction – with Serbia’s Novak Djokovic, the former top-ranked men’s player, calling the decision “crazy”.

The subsequent response by governing bodies the ATP and WTA to remove ranking points from, arguably, the sport’s grandest stage led multiple-major winner Naomi Osaka to describe this year’s Championships as having been effectively reduced to an “exhibition” event.

It has created a scenario that is set to have significant ramifications for the players – from those at the very top, to young Britons hoping to climb the ladder.

But what, exactly, does it all mean?

The major winners and losers at the top

On the surface, the biggest losers will be those who, like Djokovic, performed well at Wimbledon last year and will be unable to defend the points they won.

Djokovic, a six-time champion at the All England Club, will be heavily affected by the removal of ranking points because of being unable to retain any of the 2,000 points he earned by triumphing at SW19 last year. He could, as a result, end up seventh in the standings.

Having lost his status as world number one two weeks before this year’s tournament, the 20-time major winner will fall even further adrift of Russian Medvedev who, despite not being permitted to play, will miss out on only 180 points by comparison after a last-16 exit in 2021.

Last year’s men’s runner-up Matteo Berrettini, another of those to be hardest hit, wishes the “unfair” decision to strip Wimbledon of its ranking points had been dealt with better.

“It is one of the biggest decisions the ATP took in the last 20 years or so. I wish it was handled a different way,” the Italian world number 11 said.

“I understand we are living in difficult times, I just wish this decision was taken differently. Nobody contacted the players and asked our opinion.

“I don’t think it is fair but I get it is a really complicated situation.”

The ATP said Wimbledon’s decision – taken to “limit Russia’s global influence” in line with UK government policy – “undermined” its principle of ensuring players of all nationalities can “enter tournaments based on merit, and without discrimination”.

The move is also set to shake up the WTA standings.

Belarusian world number six Aryna Sabalenka, a semi-finalist last year, and Czech world number seven Karolina Pliskova, the beaten 2021 finalist, are the top-10 players who will suffer the most.

Pliskova, who will at least still be able to enter the tournament, said last month the chance to win the trophy was her motivation to return – but she may drop out of the top 15.

Rublev, who has spoken out against the war in Ukraine, previously described the ban by Wimbledon as “complete discrimination”.

“I think everyone will play Wimbledon regardless [of the points decision],” said Queen’s champion Berrettini.

“It will be record prize money this year so everyone is willing to play, but also because it is Wimbledon and one of the most important tournaments we have.”

Points or prizes – what’s it all about further down?

It’s not just those at the top that are set to be affected.

Emerging young players may also miss out on valuable points, in a sport in which an improved ranking can offer a springboard to greater sponsorship and endorsement opportunities, as well as a greater chance of securing more regular appearances at major events.

“Obviously at the moment ranking points are a big thing for me as I work my way up,” said British 22-year-old Paul Jubb, who has been granted a Wimbledon wildcard.

“But the pay cheque is also a good bonus for me at the moment,” added the world number 219.

For lower-ranked players, some of whom compete predominantly to make ends meet in the world of professional tennis, first-round appearance money at Grand Slams can often dwarf the winnings from smaller competitions.

This year a player will earn £50,000 for playing one main-draw match at Wimbledon – as much as eight times the amount available for the same achievement at an ATP or WTA 250 event.

One win in the singles draw can raise that prize money figure to £78,000.

All things considered, the absence of points does not diminish Wimbledon’s appeal for Jubb as he seeks to maintain an upward trajectory.

“The experience of playing all these big players goes a long way early in your career,” the Briton said.

“I think without the ranking points there’s still many, many positives for me to play there.”

For young British players, there are also the potential life-changing opportunities that accompany playing in front of expectant home fans to be considered.

An appearance at SW19 offers the chance to rub shoulders with the greats – just as Jack Draper experienced against Djokovic last year.

Making his Wimbledon main-draw debut, the 19-year-old wildcard was drawn against the then world number one on Centre Court to begin the 2021 Championships.

He managed to win the first set before falling to defeat against the eventual champion.

“I am looking forward to playing, whether there are points or no points,” said Draper, who debuted in the world’s top 100 earlier this month.

“It is obviously unfortunate but it is a bit of an impossible situation for everyone involved – for Wimbledon and the players.

“But it will still be a really big tournament.”