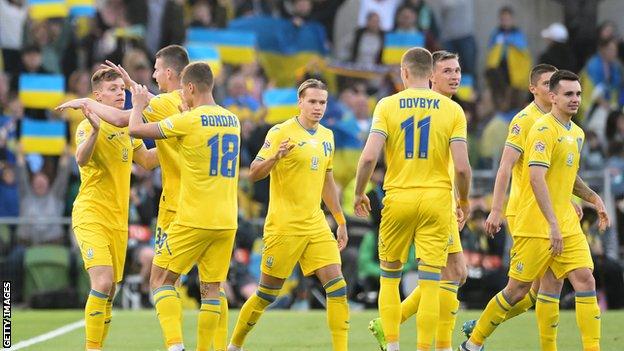 The Republic of Ireland’s miserable start to the Nations League continued as a much-changed Ukraine recovered from missing out on World Cup qualification to claim a narrow win in Dublin.

It was another admirable performance from Ukraine amid the turmoil in their country following the Russian invasion, and one that delighted their vocal supporters on Lansdowne Road.

For the Republic, however, it is further disappointment following the defeat in Armenia and a result that extends their winless sequence in this competition to 12 games.

Boss Stephen Kenny has been in charge for eight of those, and while he insisted his players had moved on quickly from the loss in Yerevan, it was another ponderous Irish display that lacked a cutting edge in the final third.

Shane Duffy came closest to scoring for the hosts when his 79th-minute header was tipped on to the crossbar by Ukraine goalkeeper Andriy Lunin as the Republic made it 10 competitive matches without a home win, a run stretching back to June 2019.

Like in Scotland and Wales, Ukraine were given a warm reception in Dublin with applause ringing out prior to kick-off as the Irish fans showed solidarity with the war-torn nation.

Indeed, there was a poignant moment when injured Republic captain Seamus Coleman and the mascots presented the Ukraine supporters with sunflowers – their country’s national flower – in a display of peace.

With Ukraine having dedicated immense emotion and effort to their World Cup bid, boss Oleksandr Petrakov unsurprisingly rung the changes with Everton full-back Vitaliy Mykolenko the only player retained from the defeat in Cardiff.

And with Ukraine missing the likes of Oleksandr Zinchenko and Andriy Yarmolenko and the Republic clearly low on confidence following Saturday’s miserable result in Yerevan, it was a low-key first half.

While Jason Knight produced a decent save from Andriy Lunin with a well-hit 25-yard shot, the Republic’s best first-half moment arrived when Callum Robinson scampered through the Ukraine defence and was felled by Valeriy Bondar only for referee Filip Glova to wave the Irish penalty appeals away.

With no real urgency from either side, the game was crying out for a goal – and it nearly got a brilliant one, but Taras Kacharaba’s celebrations were cut short when his stunning volley was ruled out following a VAR check with Artem Dovbyk deemed offside in the build-up.

There was nothing wrong with Tsignankov’s goal, however, as the winger struck the winner within three minutes of being introduced at half-time when his curling free-kick eluded everyone in the box, including a scrambling Caoimhin Kelleher in the Republic goal.

From there, the Republic huffed and puffed but Duffy’s header was the best chance they could muster, although Knight blasted a shot over the bar in injury time after an acrobatic Duffy effort was blocked.

At full-time, the Ukraine players saluted their 3,500 supporters but it was an all-too-familiar sense of deflation for the Irish, who must regroup in time for Scotland’s visit to Dublin on Saturday while Ukraine face Armenia in Poland.