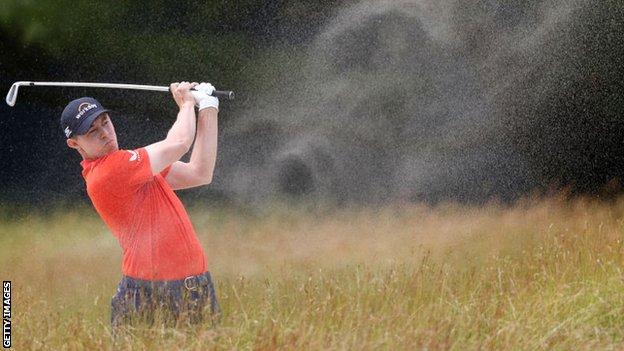 Matt Fitzpatrick says winning the US Amateur at Brookline in 2013 will give him “an edge” when he chases his first major at the Boston course on Sunday.

The Englishman shares the US Open lead after a two-under 68 in round three drew him level with American Will Zalatoris on four under.

He would become the first non-American to win both titles should he triumph.

“To come back here and play so well again, it gives me growing confidence round by round,” said Fitzpatrick, 27.

“I certainly think it gives me an edge over the others. I genuinely do believe that. It was a real positive moment in my career, it kickstarted me.”

Only nine players are under par heading into Sunday’s final round and just six shots separate the top 24 in the field.

Fitzpatrick will tee-off alongside Zalatoris at 19:45 BST and the BBC Sport wesbite will have live radio and text coverage of the final round from 19:00.

The Sheffield-born golfer has seven wins on the European-based DP World Tour, including victories at the big-money season-ending DP World Tour Championship in 2016 and 2020.

However, he has recorded just two top-10 finishes at majors, at the 2016 Masters and last month’s US PGA Championship at Southern Hills, Tulsa.

He was in the final pairing with Chile’s Mito Pereira in the fourth round, but finished joint fifth as Justin Thomas beat Zalatoris in a play-off.

“Up until Southern Hills, I didn’t appreciate how hard it is to win a major,” Fitzpatrick admitted.

“I’ve not really challenged up until then.

“But it’s not. It brings a lot more to the mental aspect of the game than other events.

“These past two majors, I feel so much more comfortable. My game has changed and I have much more of a chance than I’ve ever had in my career.”

Becoming a big hitter to land the big prizes

Fitzpatrick has not been renowned as one of the sport’s biggest hitters but has worked hard on that aspect of his game, evidenced by him reaching the green in two shots on the the 622-yard 15th hole.

“I think that’s been a big, big thing this week, and certainly the past few weeks really, just noticing me playing with other guys and being able to pass them consistently,” he said.

“It was the big thing really that was holding me back. Putting was good. Short game was good. Approach play was fine, but my driving, I was straight but just didn’t have that distance to take advantage of everything else.

“Now I feel like I’ve gone one more than that. Rather than just keeping up, I’m past guys. It just gives me a much bigger chance in competing week in, week out.”

Fitzpatrick finished joint seventh at that Masters in 2016 and he says his career would feel “incomplete” if he does not win one of the sport’s biggest prizes.

“They mean more. Everyone remembers the majors and who wins them and when they’re won,” he added.

“Those are the ones that mean something. That’s what everyone strives to achieve.