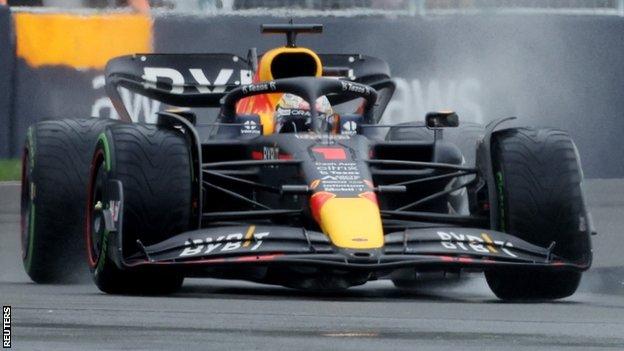 Verstappen was in control throughout the session as the track started wet and progressively dried and ended up 0.645 seconds clear of the field.

Alonso took his first front-row grid slot since he was on pole for the 2012 German Grand Prix in a Ferrari.

Ferrari’s Carlos Sainz was third, ahead of Mercedes’ Lewis Hamilton.

Verstappen’s title rival Charles Leclerc qualified 15th having not run in the second session because he has a penalty for using too many power-unit components that means he will start from the back of the grid.

The second Mercedes driver George Russell was ahead of Hamilton throughout qualifying until taking a gamble on running dry-weather slick tyres for the final run and dropping down to eighth.

Kevin Magnussen and Mick Schumacher impressed to take fifth and sixth and with it Haas’ best ever team qualifying result.

There was a notable performance from British-born Thai Alex Albon in the Williams in 12th place. McLaren’s Lando Norris ended up 14th after an engine problem prevented him completing a lap in the second part of qualifying.

Evergreen Alonso rolls back the years

It was a masterclass from Verstappen, who looked in a league of his own whenever he competed a lap throughout the session.

Starting from pole, he now has a golden opportunity to inflict maximum damage on Leclerc in the championship, as Ferrari’s dismal run continues following an 80-point swing in Verstappen’s favour in the championship over the last five races.

“I still expect it not to be a straightforward race,” said Verstappen. “But today with the tricky conditions we stayed calm and didn’t make mistakes.”

While Verstappen looked a strong bet for pole in the Red Bull throughout, his team-mate Sergio Perez fared less well and crashed in the second session, ending up 13th.

But although Verstappen was hugely impressive, as always in the wet, arguably the star of qualifying was Alonso, who has looked quick all weekend, wet or dry, and continues to prove at 40 that age has not dimmed his talent – as he has always insisted since he returned to F1 at the beginning of last year.

Quick in the dry in practice on Friday, Alonso continued his form after rain hit the Circuit Gilles Villeneuve for the start of the weekend, and he danced the Alpine around the track, power-sliding it out of the last corner seemingly for fun to out-qualify his team-mate Ocon by 1.585secs.

“We were P1 in FP3 this morning so it seemed we were quick in the wet but it was not really wet at the end, it was almost dry,” Alonso said. “But the car was fast in the dry and in the wet today so it has been a very competitive weekend.”

Hamilton had been out-qualified by Russell for three consecutive races and it looked set to be four until the younger man took a gamble that the track might be ready for slick tyres on the final runs.

The risk did not pay off – Russell ran wide at the second corner on his first attempt, put a wheel on the painted pit-exit line and drifted into a slow spin. He tried again but his first sector was 10 seconds off the pace and the game was up.

Hamilton, who has been spending the week receiving treatment to his back after suffering badly from the Mercedes’ bouncing on the straights at last weekend’s Azerbaijan Grand Prix, said: “This past week has been a real challenge and every day working through the pain and getting my body right.

“We are still struggling with the car, so to get top four in those conditions is awesome.

“It is my best qualifying this season and feels similar to my first ever qualifying in Australia in 2007, I was so excited.”