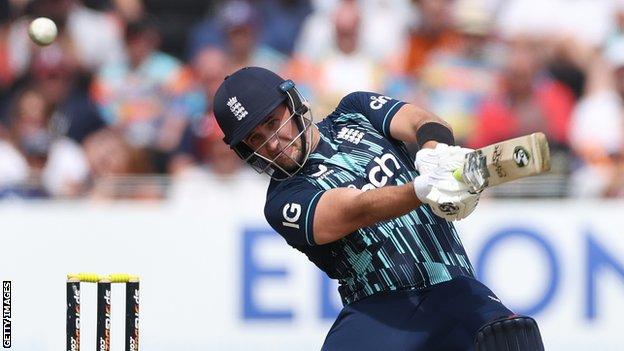 Jos Buttler says England will keep chasing the magical target of 500 runs in one-day internationals after a record-breaking victory over the Netherlands.

England posted a staggering 498-4 against the Dutch at the VRA Cricket Ground in Amstelveen, bettering the 481-6 they made against Australia at Trent Bridge in 2018, as well as surpassing the List A record of 496-4, scored by Surrey in 2007.

It was spearheaded by wicketkeeper Buttler’s unbeaten 162 off 70 balls, which included 14 sixes and seven fours.

He was ably supported by fellow centurions Dawid Malan (125) and Phil Salt (122) and Liam Livingstone’s brutal 66 off 22 balls as England racked up 26 sixes in total – many of which were hit into the forest surrounding the ground.

Livingstone needed 12 off the final two balls in England’s innings to reach 500 but could only manage a four and a six as England fell just short of the milestone.

Buttler said: “We’ve come close one time before this and the message in the team is to try to keep pushing boundaries and taking the team forward, take the game on. And everyone really stuck to that.

“Is it a matter of time before me make 500? I don’t know. We’ll keep trying to do it. It’s a tough thing to try to achieve. It’ll probably have to happen on a belting wicket at a small ground.

“I think the biggest thing, irrelevant of the score, is the mentality we are showing as a team. We keep trying to better that and be better as a team when we play. We know that stands us in good stead.”

Buttler typically operates as the middle-order ‘finisher’ in England’s batting line-up, and was promoted to four against the Dutch, but is typically adaptable to whatever the situation requires.

He continued: “I think over the years when we have got off to good starts I’ve sometimes been pushed up to number four or something and here we got off to a fantastic start with Phil Salt and Dawid Malan and we are pretty flexible as a group. If that’s what they do on the day I’m more than happy.

“I can’t see many chances of it presenting itself in the future, though, with Jason Roy, Jonny Bairstow, Phil Salt and these guys at the top of the order. The middle-order role is something I enjoy in one-day cricket as well. I am very happy with the role I have got.”

Without multi-format players Jonny Bairstow, Joe Root and Ben Stokes this was a chance for some of England’s other white-ball players to catch the eye of new coach Matthew Mott.

Competition for places in England’s top order has never been so intense and Buttler reflected on the depth of that pool of talent.

He added: “Phil Salt looks just another one off the production line with white-ball batters in England. I’ve been really impressed watching him up close in the days leading into this.

“He’s struck the ball incredibly cleanly here. It puts the bowlers under a lot of pressure. He’s very fearless and in the Jason Roy mould at the top of the order. He’s got a great future.

“Liam Livingstone too, has got an incredible talent for walking in and being able to hit fifth or sixth gear straight away. It’s really exciting for English cricket.