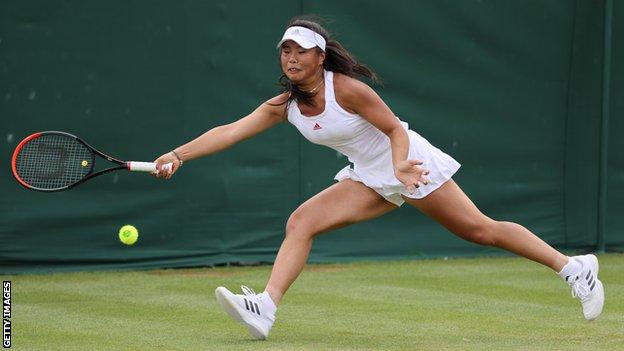 Teenage tennis ace Mimi Xu could become the youngest female to qualify for the main Wimbledon tournament since the sport’s professional era began in 1968.

Just three qualifying matches stand between the 14-year-old from Swansea and the senior ladies’ draw.

Coco Gauff is the youngest player to qualify having done so aged 15 in 2019, when she was slightly younger than Annabel Croft, who got there in 1981.

Xu is no stranger to breaking records having become the youngest player to enter Junior Wimbledon in 2021.

“It’s a big step up from last year but I’m really grateful to have had incredible support from Loughborough academy, the LTA and Tennis Wales,” added Xu.

“No matter the result, it’s a privilege to compete at Wimbledon with other fantastic players.”

Xu was given a wildcard for Wimbledon after winning the Under-18 singles final at the National Tennis Championships in April and will face Hanna Chang of USA in the first round of qualifying on Tuesday.

She has already proven she can compete with senior players having given former US Open semi-finalist Yanina Wickmayer a run for her money at the recent Ilkey Trophy event before losing 6-2 6-2.

Xu’s career began at Swansea Tennis and Squash Club, with her pictures and achievements proudly displayed throughout the clubhouse.

She now trains with a world-class team at the National Tennis Academy at Loughborough, where she recently had a hit with British number one and 2021 US Open winner Emma Raducanu, who knows all too well the pressures that come with being a teenage tennis sensation.

Simon Johnson, the chief executive of Tennis Wales, says the organisation is “extremely proud of Mimi and all her achievements so far”.

“Not only have we been fortunate to see her develop into a talented player, but also an inspiration for young players across Wales,” he said.

“To reach this stage and to play on such notorious courts is an incredible achievement, we wish her all the best for her upcoming match.”