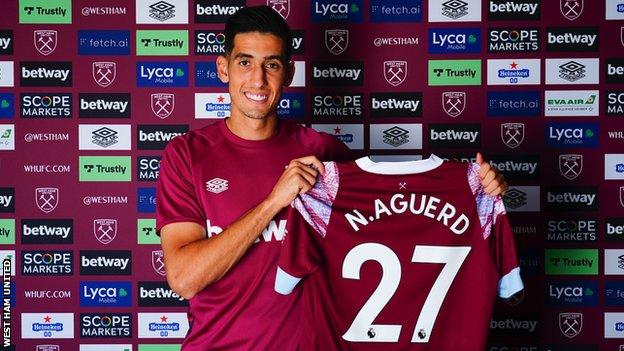 West Ham have completed the signing of Morocco defender Nayef Aguerd from Ligue 1 side Rennes for £30m.

The Premier League club have confirmed that the 26-year-old has signed a five-year contract with the Hammers.

The left-sided player made 66 league appearances for Rennes after joining from fellow French club Dijon in 2020.

“I was really excited when I heard about West Ham’s interest,” he said. “I knew I needed to go to the Premier League, it’s a dream for every player.”

The transfer fee for Aguerd, who has 25 caps for Morocco, is the fourth-highest paid by West Ham, behind only those for Sebastien Haller, Felipe Anderson and Kurt Zouma.

In a farewell post to fans on social media, Aguerd said it was a “difficult decision” to leave Rennes as he had enjoyed “exceptional times” at the club.

“West Ham is a historic club,” Aguerd added. “I saw a few of their games this year, and I saw the fans and the atmosphere were fantastic, with the bubbles!”

Manager David Moyes said he hoped Aguerd would help the Hammers challenge for a top-six place again next term to match their finish in 2020-21.

“He’s a great addition that will add to our defensive options,” said Moyes.

“I have been really impressed with Nayef’s character and attitude during our discussions.

“He has a great desire to improve and be successful, and I am sure he will fit in very well to the environment we have at Rush Green.”

Aguerd was an ever-present in his country’s run to last season’s Africa Cup of Nations quarter-finals and also played in both World Cup play-off matches against DR Congo as Morocco qualified for Qatar.

Find all the latest football transfers on our dedicated page.