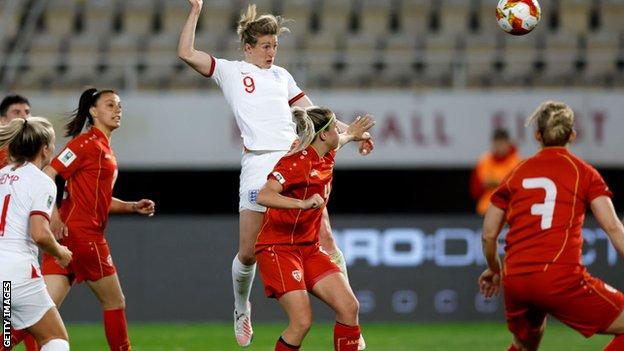 White, who netted her 50th goal in Skopje, overtakes Harry Kane and Bobby Charlton and is three behind Wayne Rooney’s England record of 53.

Victory means England move to within touching distance of qualification before Tuesday’s match against Northern Ireland in Belfast.

They opened the scoring through Arsenal forward Mead, who netted two goals in seven minutes in the first half, before doubling her tally after the break.

Toone scored England’s third before setting up White, who headed powerfully across the keeper in the 41st minute to reach another landmark.

The Lionesses, who won 8-0 in the last meeting with North Macedonia in September, were 5-0 up at half-time against the side ranked 132nd in the world.

But with only eight shots on target from 22 efforts in the first half, England had room to improve, and they reached double figures within 78 minutes.

Lauren Hemp was heavily involved as usual – providing two assists in the process – before coming off on the hour, while Manchester City team-mate Georgia Stanway grabbed a brace.

With three games remaining, England sit comfortably top of Group D and still have not conceded a goal in World Cup qualifying under Sarina Wiegman.

Having become the Lionesses’ all-time top goalscorer in November, White is closing in on Rooney’s England record – for both men and women – of 53 goals.

She had plenty of opportunities in Skopje to add to her tally, after hitting the crossbar earlier in the first half.

Hemp was often the provider with her pacey runs down the left but it was Toone who delivered the perfect cross for White’s header.

With White substituted in the 71st minute, it was Toone who stepped up to extend England’s tally and bring up double figures, capping off another good performance from the Manchester United youngster.

Arsenal forward Mead showed her attacking threat once again too – scoring at least three goals in a World Cup qualifying match for the third time in this campaign.

It took her tally to 12 overall in qualification as England notched up their seventh win, having scored 63 goals without reply.

They travel to a sold-out Windsor Park next week to take on third-placed Northern Ireland hoping to extend their unbeaten record under Wiegman in all competitions.