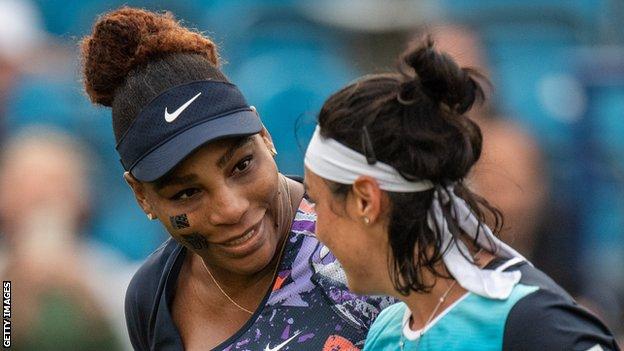 Serena Williams’ comeback continued as she and Ons Jabeur reached the Eastbourne doubles semi-finals with an entertaining win over Shuko Aoyama and Chan Hao-ching.

The American great, playing just her second match in 12 months, produced a strong serving performance in a 6-2 6-4 win over the doubles specialists.

She and Jabeur saved all nine of the break points they faced.

Williams has been given a singles wildcard into Wimbledon, which begins on Monday, but joined forces with the Tunisian singles world number three to gain some grass-court practice.

The two have visibly enjoyed playing alongside one another, with both players showing a mix of power and deft touch at the net.

“I think we played together much better today – although I thought we played really well yesterday,” said 23-time Grand Slam singles champion Williams.

“I was looking at Ons like ‘wow’ during the match.”

Jabeur jokingly asked Williams if she would pair up with her for the US Open, adding: “It’s really great. I think we played really good.”

The two will face Serbia’s Aleksandra Krunic and Poland’s Magda Linette for a place in the final.

Williams is a 16-time Grand Slam doubles champion but is testing out her fitness following the ankle injury at Wimbledon last year that created doubts about her returning to the tour.

‘Onserena’ – the nickname given to the two by Williams – started strongly, with Williams showing little rust despite playing back-to-back matches for the first time in more than a year.

The two did not face a break point in the opening set, winning five games in a row to take a 5-1 lead before serving out the set.

When they did face two break points on the Williams serve, the American did what she has done so many times – she sent down three aces to cancel out the opportunity and hold.

Williams moved well, with she and Jabeur coming out on top of an entertaining rally during which Jabeur hit the wall at the back of the court as she raced to make a shot.

At the changeover, Williams checked a rule with the umpire about tipping the ball over the net, adding: “It’s OK, I just wanted to make sure – it’s been a while!”

On the whole, Williams served well and came out the better on several baseline exchanges, with Jabeur the stronger of the two on the return of serve.

Asked afterwards what she did to celebrate their victory on Tuesday, Williams joked: “I went to the beach and for a swim like everyone here in the cold water… no, no way!

“I didn’t do much, I just played with my baby [daughter Olympia]. She is so fun.”