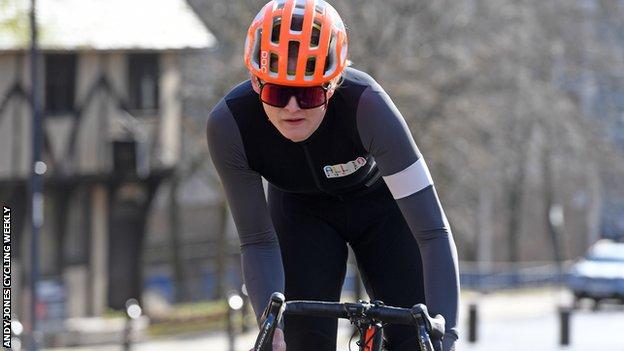 The organiser of a women’s cycling race says he has had “numerous” offers of financial support after its main benefactor withdrew funding in reaction to British Cycling’s suspension of its transgender policy.

Colin Clews, the chief organiser of the Women’s CiCLE Classic, told BBC Sport some offers have come from women’s rights groups, as well as from individuals and companies.

Campaign groups Sex Matters and Fair Play for Women announced they had made a formal joint offer.

Peter Stanton has sponsored the race since its 2016 inception but withdrew his support on Tuesday after he said British Cycling made the “totally unacceptable” decision to suspend its transgender policy last week.

That decision came after transgender cyclist Emily Bridges was prevented from competing in her first elite women’s race, despite meeting the requirements, after the UCI – cycling’s world governing body – ruled her ineligible.

Clews said he respected Stanton’s views but “does not in any way condone this as a course of action to assist in promoting of those views”.

“The transgender policy adopted by British Cycling had been the result of a full consultation process and was believed to have been working well until last week when it was suspended without any further consultation,” Stanton told The British Continental.

“Whilst fully supportive of women’s sport, I also have many friends and colleagues within the transgender community whom I feel that I would be letting down if I did not make a stand to show my support for their rights.

“This is not the first case of a transgender rider competing under UCI rules, or even as part of an official UCI team, and to arbitrarily change that position based on one individual case, I find totally unacceptable.

“I am desperately saddened by the Emily Bridges case and the actions that it has prompted me to take. I sincerely hope that a satisfactory resolution to her case and that of similar cases in the future can be quickly found in the interests of all parties involved, and sport in general.”

Following Stanton’s funding withdrawal, British Cycling has pledged additional support to the Women’s CiCLE Classic, which Clews says is just under £10,000, but a £15,000 shortfall remains.

The Women’s CiCLE Classic forms part of British Cycling’s National Road Series and is set to take place on 19 June in Melton, Leicestershire, alongside its junior men’s equivalent.

After a plea for support on Tuesday, Clews said the response had been “absolutely incredible”.

However, he said he had reservations of accepting offers from campaign groups for fear of “politicising” the race.

“At the present time, myself and colleagues are considering that [offer] amongst other options that might be available to us from commercial sources,” he said.

“We want this event to continue into the future and therefore we would prefer to link with a partner or number of partners who are able to give us financial backing for a number of years ahead, so we’re not in the same position next year as we’ve found ourselves in this year.

“Secondly, and this is important to appreciate, we are a cycling event, our objective is to pursue women’s cycling and to promote it at its highest possible level in this country but I have colleagues who have reservations with regard to the potential link to women’s rights groups that might indicate to anyone out there, or certain individuals out there, a politicising of the event.”

Clews said they were free to take sponsorship from whoever they wish, though the UCI places strict bans on brands of tobacco, alcoholic spirits and any other products that might “damage the image” of the sport.

He added he “endorsed” British Cycling’s decision to suspend its transgender policy but called on the authorities to resolve the issues surrounding transgender athletes.

“What is so important to us is the fairness of any races we put on and certainly the current suspension that British Cycling have imposed on Emily Bridges we can only endorse because that goes along with that fairness element,” he said.

“But competitors such as Emily, they wish to compete, we shouldn’t be stopping them from competing, but it’s how and where and when they compete that’s the big question.

“I’m afraid those are questions that shouldn’t be placed with me as an organiser, they are for the governing bodies to resolve.”

British Cycling suspended its transgender policy on Friday, saying it was to conduct a full review of the policy “in the coming weeks”.

It means transgender women are no longer able to compete at elite female events run by British Cycling.

The previous regulations required riders to have had testosterone levels below five nanomoles per litre for a 12-month period prior to competition.

Bridges, 21, began hormone therapy last year as part of her gender dysphoria treatment, and raced in men’s events until February.

Last month, she was due to compete in her first elite women’s race at the National Omnium Championships in Derby after meeting the requirements but was later ruled ineligible by cycling’s world governing body, the UCI.

Three days before the race, the UCI told British Cycling that because international ranking points are allocated at national championship events, Bridges’ participation could only be allowed once her eligibility to race in international competitions was confirmed. That process is ongoing.

Bridges’ mother responded to the decision on social media by saying her daughter had been “dumped by email”.

UK Prime Minister Boris Johnson said earlier this week he did not believe transgender women should compete in female sporting events – a view he conceded might be “controversial”.

In response, LGBTQ+ charity Stonewall said: “Trans people deserve the same opportunities as everyone else to enjoy the benefits of sport, and blanket exclusions on trans people participating are fundamentally unfair.”

More reading on this subject