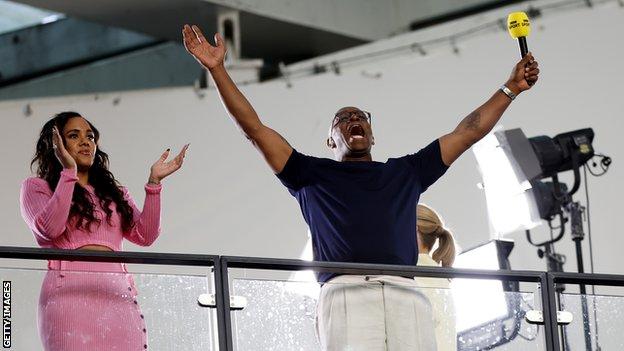 Former England striker Ian Wright has hit back at Lord Sugar’s “complete foolishness” after the Apprentice star complained at the lack of male pundits on BBC Sport’s Euro 2022 coverage.

Lord Sugar tweeted on Saturday that “all the commentators are women”.

On Tuesday, he suggested that Wright had been included in coverage of Monday’s 8-0 win against Norway because his earlier tweet “touched a nerve”.

Wright responded, saying he had been booked to appear a year in advance.

The former Arsenal and Crystal Palace star addressed Lord Sugar directly in a video on social media, saying: “Alan, the thing is, rather than just saying ‘I got it wrong, lots of men are working at all levels of the tournament’, you doubled down on some complete foolishness.

“In your mind you actually thought after you sent that tweet that the BBC phoned me up, never mind the fact that I’ve been booked to do this for a year, and said: ‘Ian, you’ve got to get back from Germany ASAP. Alan Sugar’s tweeted and we need to get you on. We can’t upset him.'”

BBC Sport announced its line-up of pundits for the tournament, including Wright, in June.

On Saturday, Lord Sugar wrote: “I am watching the women’s football and notice that all the commentators are women.”

After his tweet gained attention, including a reply from BBC presenter Gabby Logan, Lord Sugar commented on Tuesday morning: “I was pleased to see my old mate Ian Wright was given the opportunity to commentate on the ladies game last night.

“I wonder if my earlier tweet below touched a nerve. Of course BBC sport will say not at all, Ian was already lined up for it.”

Having offered analysis at England’s record-breaking 8-0 win, Wright responded: “You genuinely believe that that happened? That says to me your ego is totally out of control. You’re coming on Twitter for attention – it’s laughable.

“I’ve got to say, thank you for that tweet. If it wasn’t for you I would have missed one of the greatest England games that has ever been played.

“In all seriousness, I’m glad you’re watching. The only thing that you can find fault with doesn’t even exist.

“I sit in these rooms with ex-players belittling the women’s game all the time. I’m so glad it annoys you and all of them. I hope you enjoy the rest of the tournament. Can you please tweet again so I can work Friday?”