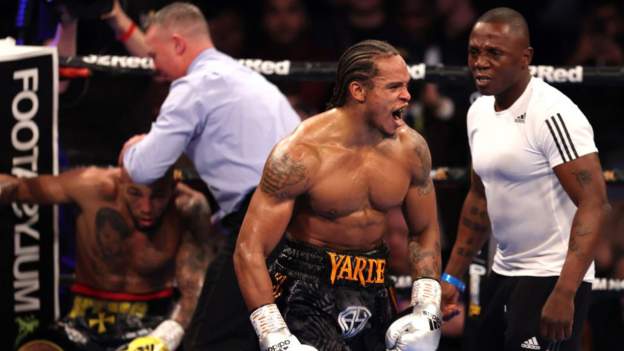 Yarde was a changed man from the one beaten convincingly by Arthur a year ago, setting a ferocious pace and landing hard shots from round one.

A game Arthur was forced into survival mode immediately. But he was eventually dropped in the fourth round under a flurry of eye-catching hooks from Yarde, succumbing to the first defeat of his career.

The start was night and day to the first round 12 months ago, with Londoner Yarde stepping on the gas from the off. The Manchester fighter – who was defending the Commonwealth and WBO Intercontinental titles – did well to pull Yarde into clinches to slow him down and managed to narrowly avoid serious damage.

Arthur composed himself in the second after surviving a furious start but the Londoner could count himself two rounds up – and then stunned his opponent again in the third with a hard right hook. Arthur tried to fight fire with fire as Yarde stepped in, but was unable to push him back.

Yarde’s right hand was finding its home in a way it never did in the first fight, but Arthur smiled as he saw off another fast flurry in the final 20 seconds of the third round.

Arthur thought he had hurt his opponent early in the fourth, but with a shake of the head, Yarde stepped in and unleashed.

He caught Arthur repeatedly with blows to the head, mixing in uppercuts with shots to the body. Eventually, the Mancunian’s knees buckled under the pressure.

Arthur was not permitted to continue, sparking wild celebrations for Yarde who avenged just the second defeat of his career and took the Commonwealth and WBO Intercontinental titles.

While Arthur is likely to push for the trilogy, Yarde will look forward to securing a world-title fight in 2022, in what will be his second crack at becoming a world champion.

Hamzah Sheeraz stopped Bradley Skeete with a late flurry in the ninth round of their light-middleweight bout.

The fight will be remembered for a controversial eighth round when Skeete – who was in control for much of the bout – was dazed by an illegal blow.

Skeete was able to dance away from Sheeraz’s big power shots for seven rounds, but was undone by a frantic eighth round where he was twice on the canvas. Sheeraz, though, narrowly avoided disqualification for a late punch.

The first knockdown was struck off and Sheeraz was deducted a point for striking Skeete when he had already taken a knee.

But Skeete was clearly dazed and a firefight ensued, with Sheeraz sending his opponent back down to the deck with a hard left hook moments later.

Sheeraz was content to abandon his jab for much of the fight and his risky strategy paid off when his opponent finally began to slow down – but the London crowd clearly felt Skeete’s demise was due to the illegal blow.

Skeete was forced into survival mode in the ninth round, but could not stay out of the way of Sheeraz’s power shots.

Sheeraz dropped him twice in quick succession and the referee waved off the fight when he beat the count for the second time.

Boos rang out in the arena, but the result stands and Sheeraz claimed the 14th win of his fledgling pro career.

Dennis McCann remained undefeated with a points win over Argentina’s Juan Jose Jurado in a dominant performance from the emerging prospect.

Draped in ‘Dennis the Menace’ shorts, McCann demonstrated slick skills from the first bell, with stinging shots on the inside. McCann set a ferocious pace but was unable to find a knockout blow despite being allowed to pick his shots at stages.

The final seconds of the first round were the closest McCann got to a finish when he sensed some hesitancy from his opponent. A tired Jurado leaned up the ropes, clearly keen for a breather, and allowed McCann to offload at will, but the bell arrived to ensure a second round.

The same sequence continued to happen throughout the eight rounds, with McCann unleashing on Jurado as he leaned against the ropes. McCann was so comfortable, he opted to showboat in the final three minutes.

McCann’s corner urged him to be more aggressive and his quick counters and evasive slips drew loud cheers from the crowd but there was to be no spectacular moment this time round for the rising star who claimed the 11th win of his pro career.